Jørgen Rieck’s Archaeological Collection is the result of a whole life’s commitment to amateur archeology. The collection has been collected by former guard manager at Danfoss, Jørgen Rieck, who came from Thy, but was resident in Svenstrup at Nordals.

Jørgen Rieck was only eight years old, when he walked behind his father on a hunting trip and found a flint. In a 1956 article in the Danfoss newspaper, “Ventilen” (The Valve), Jørgen Rieck explained that the flint tools he found at that time set off his boyhood fantasy, and that the Stone Age people became his great heroes.

His father was a capable amateur palaeontologist, i.e. a collector of fossils, so Jørgen Rieck has had a good role model.

Fortunately, both Jørgen Rieck and his father Laurids Rieck were married to women who appreciated the men’s interests. Trisse (Eva) Rieck said at her wedding that she married a stone-rich family. In the beginning she was perhaps a bit jealous of her husband’s passion, but over time she became an equally passionate collector like Jørgen Rieck himself. 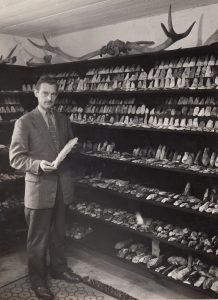 In 1971, as the collection grew beyond the available space, and – especially – as Jørgen Rieck wanted others to have the opportunity to see the big collection, he opened his own private museum in a barrack in the backyard at Nordborgvej in Svenstrup.

In 1992, the collection was moved to the old school at 4 Egebjergvej in Svenstrup. Jørgen Rieck thus transferred his collection to the then Nordborg Municipality provided the municipality made the rooms available and paid for light, water and cleaning.

At the same time, the association “Friends of Rieck’s Archaeological Collection” was created with the purpose of safeguarding the collection and keeping watch during opening hours. The ‘friends’ are now part of “E Svenstruplaug”. 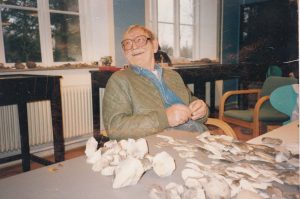 One of Jørgen Rieck’s sons, Flemming Rieck, is a trained archaeologist and among other things, he has completed excavations in Nydam Mose during the period 1989-99.

From the museum’s scrapbook (in Danish):